The ICO & Shadow of the Colossus Collection review


This collection is invaluable to people (like myself) who may have missed this amazing games when they were on the PS2. Now having played them, I can see why they are praised so highly by everyone who's played them. These games are very good at telling a story indirectly. The setting and atmosphere do most of the heavy lifting where the story is concerned. If I do have a complaint, it's that the controls for Shadow of the Colossus aren't the most intuitive. Though I am inclined to cut the game some slack considering how it succeeds wildly at everything else it does.


I can't say that Heavy Rain is terribly innovative, because it plays very similarly to Fahrenheit/Indigo Prophecy. However, considering that exceedingly few games play that way, it still feels unique and fresh. I am incredibly impressed with the way this game tells it's story, and how the story can change based on the players decisions and performance. Also, this game has some of the most depressing endings I've ever witnessed.


Tension. That is what this game excels at. You never know when some scary hobo is going to jump out at you from nowhere and try to stove in your head with a length of pipe. You can HEAR them, and every once in a while you might SEE them, or... was that just your imagination? And all the while, you're wondering just WHAT is going ON here? Are you losing your mind? Oh yeah, and there's a serial killer who's toying with you along the way. I'm generally not a fan of when games try to shoe-horn melee combat into a first-person perspective game. It always seems to feel clunky and poorly implemented. In this particular case, it works. Every fight is a desperate struggle.


I've thought long and hard about adding this game to my favorites list. But I suppose that says something in the fact that I'm still thinking about this game long after I've played it.

This game certainly isn't without faults. In fact, it has MANY faults. Yet despite all of those faults, I strangely found myself enjoying playing it.

The dialogue between characters is awful. I'd say it's hilariously bad. Much of the dialogue is spoken in what sounds like an accusatory tone, as though every character were a 14 year old with a bad attitude.

Also, the checkpoint system is rather punishing. The saves the game makes are few and FAR between. This, combined with the fact that you can die VERY quickly makes for some unnecessary frustration. Also, the fact that you can't just load up a level to try for unlocking achievements or completing combat challenges or finding collectibles is really frustrating, it's also tricky to know when the game is going to move you to the next area, because you can't ever go back if you missed something.

A lot of people complain about how the game is rather linear, in that there is tons of radiation that forces you to go where it wants you to. Still, those areas where you can go are often quite large already.

The loading times that some people complain about don't really bother me quite so much after playing Skyrim, with it's absurdly long and frequent loading screens. I mean, this game IS beautiful, graphics wise, and the areas it's loading up are really quite large, so I don't hold the loading times against it too much.

The frequent real world ads in game I don't begrudge the game too much for having. If there are big billboards that you can swing from all over the place, why WOULDN'T they have advertisements on them? The only culprit I'm not happy with is Pepsi. There are Pepsi machines all over the damn place, and you absolutely cannot use those big-ass, heavy objects as weapons. They are just BEGGING to be chucked at groups of enemies. I have absolutely no doubt in my mind that Pepsi didn't want their product being used as a weapon.

The fact that I thought all the dialogue was awful certainly didn't pull me into the story, so I didn't care too much about the big twist at the end, which I suppose I should have seen coming, but I didn't, again, because I wasn't following it too closely. But seperate from the big twist is the big reveal near the end, that is officially the most IDIOTIC thing I have EVER heard in a video game. His "missing" wife gave her life to make his bionic arm, because bionic prosthesis need an emotional anchor to work with their user. 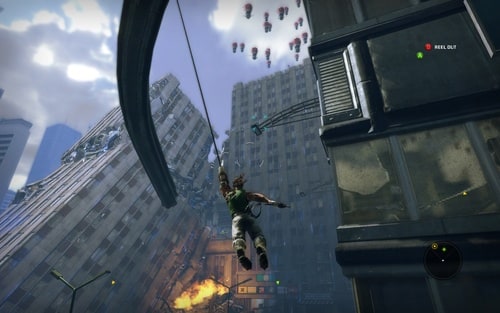 Okay, with all of those complaints out the way, I suppose I should tell you why it's on my favorites list. The swinging mechanic. I love it. There's nothing quite like it in any other video game I've played. Just Cause 2 comes close, but this game was designed around the idea that you're going to be swinging around, and it shows. Granted, you've got to be careful that you don't swing into a radiation area that will kill you in a matter of seconds, or land in deep water, as you'll sink like a rock, but I feel like that just adds to the tension and excitement.

Breaking up large swinging sections are combat encounters. A lot of other game critics have ragged on the combat in this game. I suppose if you play this game as a straight up shooter, it might not hold up. I, personally, was using the arm to it's fullest extent. I was making hit-and-run attacks, chucking heavy objects at my enemies, chucking enemies at other enemies, or grappling an enemy with my arm and flinging myself at the enemy, or hurling an enemy or object in the air and then punting the item at other enemies. I enjoyed mixing it up like that as often as I did just playing it straight, using guns and grenades.


I'll admit, I haven't played this game that much. In fact, I barely played it at all, maybe an hour total. That said, what little I played, I absolutely fell in love with. I had a heck of a time trying to get this thing to run on a modern PC without crashing. If there is a game that deserves to get an HD Remake, THIS is THAT game. It borders on criminal that it hasn't happened so far. It might not have been the most popular game, but you will be sorely pressed to find anyone who will speak ill of it.


Like all Suikoden games, there is an absurdly large list of characters, but for the first time in the series, I really felt like I actually cared about some of them. Some really stood out and had compelling stories. The overall story was quite good, and even managed to pull a few turns that I did not see coming. The gameplay was solid and challenging for an RPG.


A shameingly fun first person shooter. The story is one of revenge. Pretty simple, you want to get back at the people who beat the heck out of you and left you for dead. The soundtrack by Cypress Hill, helps get you into a "gangsta" state of mind.


A beautiful and ambitious game for the SNES. Kind of a standard saving-the-world affair, but with a fairly unique twist. Basically, evil powers have kidnapped just about everyone and everything, and you have to set things right. It was fascinating and rewarding to see that your actions in the combat areas could have a profound effect upon the non-combat Hub areas, as you set the world aright.


I feel that this is around the time that both Star Wars games and Bioware games really started hitting their stride. This game is a result of both properties firing on all cylinders. It is definitely still strongly in the RPG category, but the action side of the game is starting to creep in.


Classic hack n slash adventure. There's a rich lore to be found in this world. Decent soundtrack & sound effects and positively gorgeous cutscenes. Fun and varied characters to pick and play, and even then, there are further different ways to play each character.